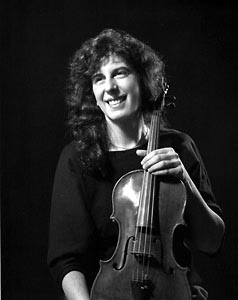 Martha Strongin Katz was a founding member of the internationally acclaimed Cleveland Quartet, performing over 1,000 concerts, including appearances at the White House, on television’s Grammy Awards (the first classical musicians ever to appear on that show,) on NBC’s “Today” show, and in the major concert halls of Europe, North and South America, and Asia. The Cleveland Quartet, recording for RCA Red Seal, received six Grammy nominations and Best of the Year awards from Time and Stereo Review magazines. The Schubert “Trout” Quintet recorded on the Philips label with pianist Alfred Brendel became the all time best selling chamber recording in Japan. Other distinguished guest artists with whom she and the Cleveland Quartet performed and recorded during these years include Emanuel Ax, Itzhak Perlman, Richard Stoltzman, Pinchas Zukerman, Bernard Greenhouse and the Barry Tuckwell Wind Quintet.

A noted soloist, Katz appeared in the major cities of the United States and Europe include a Carnegie Hall performance of Berlioz’s “Harold in Italy”, the Bartok Concerto with Geneva’s L’Orchestre de la Suisse Romande, and countless recital and concerto appearances. Ms. Strongin Katz studied violin with Raphael Bronstein and Ivan Galamian and viola with Lillian Fuchs and William Primrose. Winner of the 1969 Geneva International Viola Competition, she received at the same time the Max Reger Award.

Martha Katz is currently Professor of Viola and Chamber Music at the New England Conservatory and New York University. Previously, she was Professor of Viola at the Shepherd School of Music of Rice University (1996-2000) and taught for twenty years (1976-1996) at the Eastman School of Music. In addition to many summers spent performing and teaching at the Aspen Music Festival, she has also played and taught at The Banff Center for! The Arts, the Interlochen Arts Academy, Kneisel Hall in Bluehill Maine, the Marlboro Festival (and several Music from Marlboro tours), Musicorda, the Perlman Program, the Steans Institute for Young Artists at the Ravinia Festival, the Santa Fe Chamber Festival and the Yale Summer School of Chamber Music.

Ms. Strongin Katz has served on numerous international juries, the most recent being the Banff International String Quartet Competition and the Naumberg Viola Competition.