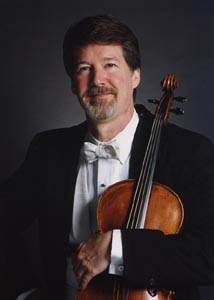 Mr. Dunham is a frequent guest artist with groups such as Houston Friends of Music, Da Camera of Houston, Musicians from Marlboro, the Boston Chamber Music Society and the Borromeo, Cassatt, Cavani, Colorado, Fine Arts, Mendelssohn, Miami, Pacifica and Ying Quartets. In addition to his chamber music activities, Mr. Dunham has given concerto and recital performances throughout the U.S. and served as guest principal viola with the Boston Symphony under Seiji Ozawa and the Dallas Symphony under Andrew Litton in their home cities as well as at Carnegie Hall.

Mr. Dunham was violist of the renowned Cleveland Quartet from 1987 through its final recordings and concerts in December 1995. The Quartet won the 1996 Grammy for “Best Chamber Music Performance” for their Telarc recording of John Corigliano’s String Quartet, written for their final tour. As a member of the Cleveland Quartet he also served as Professor of Viola at the prestigious Eastman School of Music. An Honors graduate of the Interlochen Arts Academy, Mr. Dunham studied liberal arts at Carleton College before receiving his Bachelor and Master of Fine Arts degrees from California Institute of the Arts. While at Cal-Arts, he was a founding member of the Sequoia Quartet, winners of the 1978 Naumburg International Chamber Music Award, and in 1991 he received the Cal-Arts Music School’s first Distinguished Alumni Award.

Mr. Dunham is much sought after as a jurist for events such as the Fischoff, Coleman and William Primrose Competitions, and has also been a featured soloist at the International Viola Congress. His summer activities include teaching and performing at many festivals, including those of Marlboro, Domaine Forget, Aspen, Sarasota, Amelia Island (FL), Yale at Norfolk and Musicorda. He served as principal violist of the San Diego Mainly Mozart Festival for ten seasons, and is a regular participant in the Festival der Zukunft in Ernen, Switzerland. He is featured on an album of recent music for viola and winds on the Crystal Records label, and has recorded with the Sequoia Quartet for Nonesuch and Delos, and with the Cleveland Quartet exclusively for Telarc.